Why Eyes Wide Shut Is a Bizarro Holiday Classic

Once upon a time, Tom Cruise and Nicole Kidman were supposed to be Jewish.

Bill and Alice Harford, the decidedly gentile married couple that the actors portrayed in 1999s Eyes Wide Shut, are about as kosher as a bacon milkshake. But when Stanley Kubrick first conceived of adapting Arthur Schnitzlers 1926 novella Traumnovelle in the Seventies, the filmmaker allegedly envisioned the male lead as Woody Allen, a man so Jewish that Shabbat practically observes him.

Kubricks initial casting idea, which is all but inconceivable to anyone whos seen the finished film, had been prompted by fidelity to its Freudian-to-a-fault source material. At some point during the intervening decades between Kubricks decision to bring the Schnitzler story to the screen and the first day of production, he had a change of heart. According to Kubricks credited co-writer, Frederic Raphael, the director eventually insisted that his protagonists be made vanilla Americans so as to establish a more perfect sense of normalcy for his smirking erotic psychodrama to defile. He wanted these characters to be privileged above all prejudice, capable of walking into any room as though they belonged there.

And when Stanley Kubrick made a decision, there were no half-measures. On the contrary, he took things to the other extreme, turning Bill and Alice Harford into the Mitt and Ann Romney of the Upper West Side, planting a Christmas tree in nearly every scene, and in much the same way as he had previously used candlelight to create the chiaroscuro world of Barry Lyndon flooding the films interiors with the opioid haze of holiday lights so that every room feels tongue-kissed by temptation.

This may seem like a minor cosmetic change, a quirk of casting stars capable of financing the movie, but its profound effect on the story cant be overstated.As Kubricks swan song finds itself becoming an unlikely seasonal favorite daily December showings at Manhattans IFC Center have performed so well that the theater plans to make them an annual event its becoming increasingly clear that Eyes Wide Shut isnt a perennial Christmas movie because its a masterpiece. Its a masterpiece because its a Christmas movie.

Released at the height of summer, the film arrived in the straitjacket of its own bizarre context, and it would take years before what happens in the movie began to seem more relevant than what happened behind the scenes. First, however, Eyes Wide Shut was simply that pornographic vanity project for which Hollywoods most glamorous power couple had been held hostage for more than 400 shooting days. Completed less than 100 hours before Kubricks sudden death, the film was also burdened by the pressure of being either the varnish on a perfect filmography or its only blemish.

And as if that werent enough, the movies pleasures were further and quite literally obscured by the CGI silhouettes that had to be layered over the infamous orgy scene in order to appease the MPAA. That last twist of the knife was particularly ironic, as Eyes Wide Shut is nothing if not a story about the need to discern the difference between reality and the various tricks we use to disguise it. (Christmas, as they say in the gospel of Love Actually, is when you tell the truth.) This is a Christmas moviemade by someone who was used to seeingthe holiday through the living room windows of other families,curious if the festivity was anything more than a performance for the people watching on the sidewalk outside.

There are couples that appear perfect, and then there are the Harfords, who might as well be the figurines glued to the bottom of a snow globe. Hes a doctor with a seductive bedside manner and a toothy grin that betrays a lifetime of smooth affluence the youngest man in the old boys club. Shes a recently unemployed gallery manager whose body the camera lavishes with more male attention than her husband has in years. Their relationship is a lot like the massive Christmas tree thats been hunched into their living room: gorgeously ornamented and completely severed from its roots.

When first we meet them, theyre readying themselves for the glimmering holidayparty where Alice is shamelessly hit on by a cartoon Casanova whos equal parts European royalty and cheeseball male escort. When she informsthe mysterious stranger that shes married, he parries with a practiced response: Dont you think that one of the charms of marriage is that it makes deception a necessity for both parties? When she later tells her husband about the man, he replies that the strangers desire was understandable. Wrong answer.

Christmas at the movies isnt the same thing as Christmas at mass. On screen, the holiday isnt a religious event so much as a shared shorthand for a certain frame of mind. The films that weve now come to most closely associate with the holiday (Its a Wonderful Life, Meet Me in St. Louis, Die Hard, etc.) have one thing in common, and its not a reverence for the miraculous arrival of baby Jesus. The films that truly belong to this subgenre the ones that incorporate the season in context of its broader emotional resonance share a warm preoccupation with the feeling of return, of reclaiming something that the protagonist is afraid to lose or fears already lost. Theologically, Christmas is about birth; culturally, its about rebirth. 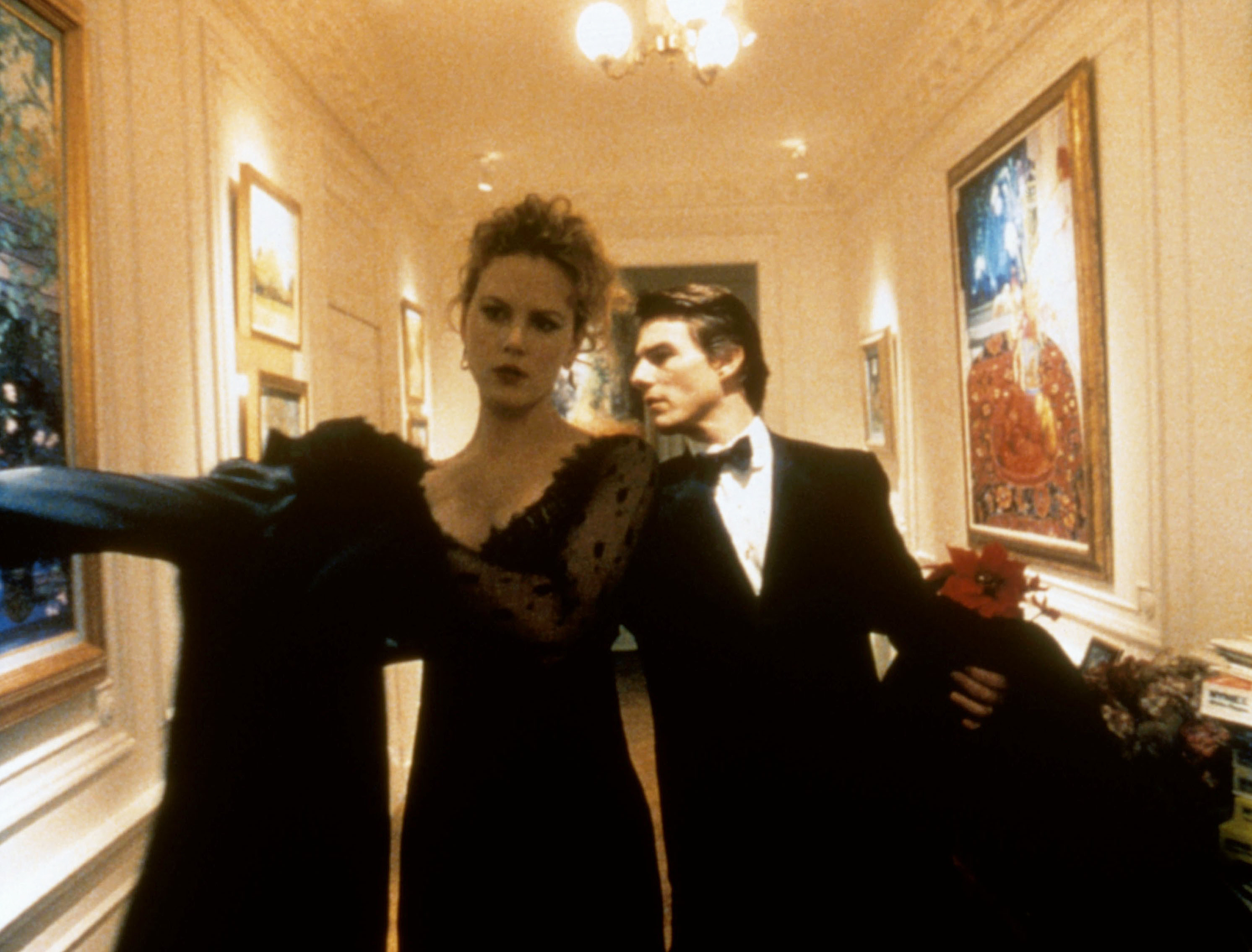 Bill Harfords dark night of the soul might appear to have more in common with The Odyssey than Its a Wonderful Life, but with each opportunity the journey gives him to throw his marriage away and with each temptation he miraculously avoids at the last second he finds himself that much closer to home. For Bill, every offering of sexual bliss is ultimately a perverse step back to his wife (hence the ironic choice ofFidelio, latin for fidelity, as the password Bill uses to gain accessto anorgy of strangers).

Retracing his steps in the cold light of the following day, Bill is gobsmacked by the many-faced Ghost of Sex Narrowly Avoided. The sweet prostitute he almost had sex with is revealed to be H.I.V. positive; the orgy house once an enchanted kingdom of embarrassed pleasures has been stripped of its magic, its consequences shown to him on a city morgues slab. By the time hefinds the Creepy-Fuck-Party mask he wore to the previous evenings shindig on the pillow next to his sleeping wife, the doctor cant help but beoverwhelmed by the reality of how far hed gone, and how much further he hadto go to makethe journey home.Finally, Bill and Alicecan wake up from their own dreams andbegin to restore the one they shared together.

Like many of the best Christmas movies, Eyes Wide Shut could theoretically take place during another time of year. The holiday party, for example, could have been timed to any other occasion without dramatically altering the plot. Likewise, Bill and Alice could have gone somewhere else for the final scene, in which they stroll through a lavish toy store while reckoning with the state of their marriage. But they didnt. And its there, in the counterfeit FAO Schwarz, that the film becomes a perfect inversion of yet another classic Christmas story: William Sydney Porters The Gift of the Magi.

In Porters fable, a poor married couple secretly sells the things dearest to them her looks, his legacy in order to afford each other presents that (irony alert!) they ultimately cant use. After a long night of weighing his wifes value against that of a half-dozen different women (each of whom comes with a price tag of some kind), Bill realizes something that his wife has long sincefigured out for herself: Christmas isnt about giving, its about getting something back.And Alice, tentatively satisfied with her husbands efforts to return to her, ends the movie by suggesting that the two of them do the one thing guaranteedto return them both to their wedding night, when everything was new and the future was full of hope.

There is something very important that we need to do as soon as possible, she tells him.

Its a Christmas miracle.