Review Nissan Evalia - Nissan has a talent in doing something innovative development, one that is done is to produce a family car that has a large capacity, supporting up to 8 people at once plus a lot of luggage. This innovation is a breakthrough that is believed to develop from time to time, now it could prove a sweet fruit for Nissan itself.
Nissan Evalia MPV is a car developed for several countries in Europe and Southeast Asia. Similarly, Indonesia, in Europe, too many people are very fond of cars with character people carrier, a big body with a spacious cabin, and fuel economy. In the homeland of this car is often used as a private car and mini cargo, while in Europe, especially France, the car is widely used as taxis.
Eksterior Nissan Evalia

The external structure of the vehicle is made up of many complex elements placed to make it look like the vehicle body and big. Bumper, front and rear coated with a color that is in harmony with the body color of the car, while the front grille and chrome plated Nissan logo in the middle. Design each side looks striking and completely different to its rivals, it can be seen from the front door design that follows the character of the European minivan. 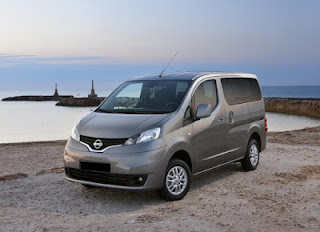 The door handles are also painted the same color as the body, it comes as standard on every trim. Continues to the rear, behind the glass has been fitted with integrated wiper and defogger. The rear door was given a touch of chrome to make it look more luxurious. The most distinguishing each of the wheels trim variant is used. For the basic variant and high equipped with stylish alloy wheels. While the bottom trim using iron wheels with wheel covers, because it is intended as a commercial vehicle while cutting production costs.
Interior Nissan Evalia

With large outer body, the effect on the inside. Nissan Evalia cabin looks quite large and spacious, and loaded with features. Even the quality of finishing the interior admirable, far from being cheap. The use of sliding door model will add convenience for anyone who sits in the back seat, for easy access in and out. The instrument cluster installed in the dashboard area of the driver's right side with tachometer and tripmeter. 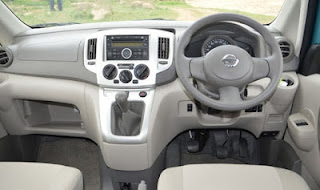 Interior comfort Nissan Evalia be compounded by Audio 2 Din with AM / FM, CD, MP3, and USB which can be enjoyed through four speakers mounted on each side. Central locking system available on all trims except for the low variant. At the highest variant, it has been equipped with an anti-glare rearview mirror. Unfortunately, the glass on the second line carrying the sliding model at the center of the glass, its size was quite small. If you are traveling away with full passengers without turning on the air conditioning, rear passengers will be suffering because of the wind from the outside does not enter the maximum.

Nissan Evalia has been equipped with a 1.5 liter petrol engine which also grafted on the Nissan Livina. Machines with HR15DE code is capable of spraying up to a maximum of 109 HP at 6,000 RPM rotation and peak torque of 148 Nm at 4,400 RPM. The level of noise and vibration is low. The engine is mated with two kinds of gearbox, which is a 5-speed manual transmission and matic conventional 4-speed transmission. 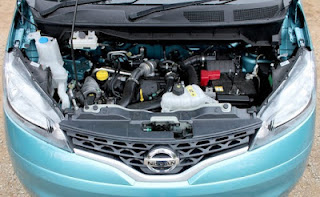 Evalia MPV is the only one that carries a single leaf spring suspension at the rear. Comfort offered quite different from its rivals, it can be said a more comfortable level, because of the suspension of this type is able to absorb shock and vibration to the maximum. Thanks to this suspension, body roll symptoms can be reduced with bongsor well for its size. But the performance on the bend or when overtaking slightly reduced because it is too soft.


Disadvantages Nissan Evalia
Similarly, a full review of the specification and the review of strengths and weaknesses Nissan Evalia. Nissan Evalia builds upon the whole character of the people of Southeast Asia, especially Indonesia. With these facts, all your wishes can be fulfilled properly ascertained.