Advantages and Disadvantages of the Datsun GO hatchback PANCA

Review Specs and Price Datsun Go Panca Hatchback - Indonesia is one of the fastest growing automobile market which is the main majority of first time car buyers. This is one reason why the entry-level hatchback or better known as LCGC car into a hard sell. The producers have flooded this segment with its flagship product, call it Agya Toyota, Daihatsu Ayla, Suzuki Karimun Wagon R, Kia Morning, Honda Brio Satya and not least the new players, the Datsun Go Panca Hatchback.
Datsun name has long faded in Indonesia. Manufacturers are under the banner of Nissan's re-debuted in Indonesia in 2014 ago. Datsun is now playing in the entry-level hatchback segment filled by the Datsun Go Panca Hatchback and Datsun Go Plus Five in the MPV segment entry-level and is expected to compete with other competitors who have had a big name and a good reputation in the local market.
The exterior Datsun Go Panca Hatchback
Generally, the person who first bought a nice car directly assess whether or not a car on the outside design. Because targeting for car buyers first, then Datsun Go Panca hatchback car design is carefully in order to look nice. Go Panca Panca hatchback has a contemporary design with hexagonal front grille that resembles a honeycomb black with chrome surround. The headlights blend well with this grille for sharp edges and pulled back toward the fender. Give it a look like the eyes of a hawk. Furthermore, the front bumper design with a tapered shape to the grill and the other side leads to the bottom of the lamp. 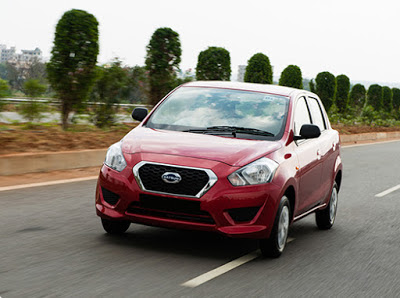 Viewed from the side, Go Panca look less funky hatchback for around a greenhouse using a metal with a swage line that rises slowly from the direction toward the stop lamp headlights. Pilar B tinged with a dark color such as black. On the back, did not get a touch of glamor like chrome accents around the bumper and stop lamp. But the good, the rear window using a large-sized glass that can help you when the car is parked for good visibility.
The interior Datsun Go Panca Hatchback
Interior Go Panca hatchback is based on the platform of the Nissan March, so the size or the size of the interior spelled almost the same. This makes Datsun Go Panca most extensive in its segment. Starting from the front row of seats used fused between left and right. More akin to a car carrying goods such as Grand Max or Kijang old school. Displacement gearknob and handbrake into the center console is claimed by Datsun useful to make the cabin more spacious. By doing so, both the front passenger and driver can exit from any direction when the car was parked in the area are narrow and crowded. 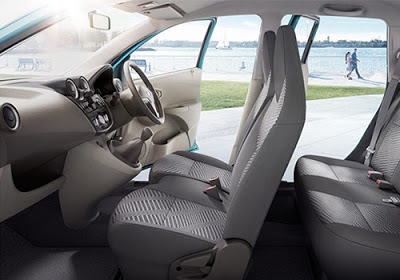 In addition to the front room, rear passenger space is also quite extensive. Plus the luggage capacity that can menapung luggage up to 265 liters. Excess This makes it an entry-level hatchback with the widest cabin. The instrument panel is still applying the design of Nissan March with plastic material quality is pretty good. While the instrument cluster using a digital tachometer which is equipped with an LED information regarding the use of fuel. The most striking difference from its competitors is, Datsun Go Panca uses a single wiper for reasons of cost-cutting production. However this is welcomed by his fans for being able to exude a sporty impression.
Performance Engineering Datsun Go Panca Hatchback
Datsun Go Panca have a machine with a capacity of 1.2 liter HR12DE code adopted by the Nissan March. By using a three-cylinder configuration, the machine is only capable of producing power 66 HP at engine speed of 5,000 rpm and a peak torque of 104 Nm at 4,000 RPM. Initially HR12DE engine of the Nissan March-powered 74 HP, but given the very light weight Datsun eventually reset the machine by reducing the force aims to reduce the use of fuel becomes more efficient. 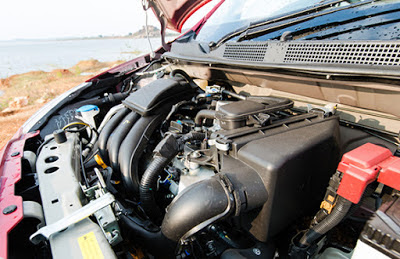 Impressions and Handling Datsun Go Panca Hatchback
Go Panca has been designed to travel from point A to B. But not designed for use on the racetrack. Therefore, the suspension set-up tend to be gentle as well as the Nissan March. The plus points were not held by March that Datsun Go Panca have quality better damping cabin. That way, the car can drive at high speed without the annoying hum of wind.

Handling or handling Datsun Go Panca good enough for city driving. Symptoms of body roll while maneuvering is also fairly minimal, coupled with support for a lightweight wheel. The next fact which may make you stunned is, cheap cars can be lauched up to a maximum speed of 160 kph without running out of breath. When entering a speed of 120 kph, the car seemed sticky with bitumen despite its overall weight is relatively light.
Specifications Datsun Go Panca Hatchback
New price
Type T: USD 103 650 000
Type T Option: USD 104 150 000
Active Type: USD 107 550 000
* Price in October 2015, can be changed at any time without prior notice.
Former price.
Type T: 70 millions
Type T Option: 75 millions
Active mode: 80 millions

Similarly, a full review of the specification and the review of strengths and weaknesses Datsun Go Panca hatchback. Overall, the car is another candidate from the hatchback LCGC who received the title of fun to drive other than the Honda Brio. Although the interior features still lost heavily from other manufacturers, but the machine's performance and its ability to achieve high speeds very admirable. Coupled with a very affordable price.