Review Specs and Price Datsun Go + (Plus) Panca - When it has not been launched, Datsun Go first exhibited during the year at the India Auto Expo to interpret the reaction of consumers when looking for an MPV. After studying the market for almost less than 11 months, finally marketed globally to some negari in Asia by labeling GO + as 'Family Compact Wagon'. In Indonesia, the entry-level MPV segment is entered into LCGC.
Sales Datsun Go is the latest innovation from Nissan in order to revive the image Datsu nyang has long since ceased production. By prioritizing spacious interior space and the price is very competitive, entry-level MPV is expected to be able to compete with its competitors in the same class as the Honda Mobilio, Toyota Avanza, Daihatsu Xenia and Suzuki Ertiga.
The exterior Datsun Go + (Plus) Panca
From the outside, there is absolutely no visible difference between a hatchback Datsun Go and Datsun Go exception of the dimensions and a longer wheelbase. With the addition of a third row, the long dimension of the Go + to 3,995 mm and overall width increase be 1635mm and 1490mm high. 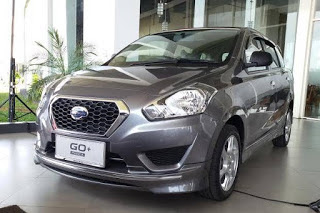 The interior Datsun Go + (Plus) Panca
Moving into the cabin, the interior looks using a two-tone look attractive. But beyond that, nothing much can be expected from his cabin. Although Datsun claims to have raised the quality of the plastic materials used become soft skin pattern such as wheat. However, no better than the hatchback Datsun Go. The equation in the interior can also be seen clearly through the overall design of the dashboard, and steering wheel feature. Uniquely, the front row seat that runs from the left to the right also drowned, plus manual transmission lever is placed in the center console. 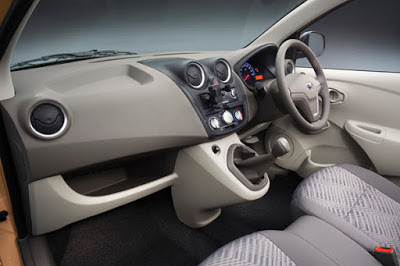 The difference of the most common is the presence of a third row. First and second row has decent legroom and headroom as the hatchback type. But unfortunately the third line seem very narrow and can only be populated by children who postured under 150 cm. As a result of the addition of rear seats, the luggage capacity is only available for 40 liters, but if the split is folded capacity increases to 347 liters. 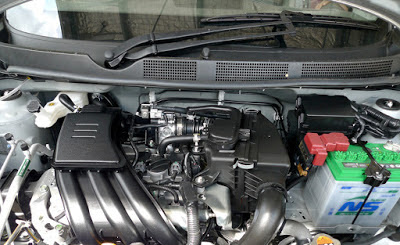 Impressions and Handling Datsun Go + (Plus) Panca
Mated to a 5-speed manual transmission, the performance of GO + on teeth 2 and 3 is really convenient to use in the city or outside the city. Has a turning radius of 4.6 meters, this particular MPV easily handled in the crowded streets creep. All of it was compounded by the performance of front disc and rear drum was excellent. But unfortunately, the cabin damping recorded very poor, at a speed of 100 kph course, the roar of the wind can be heard and clearly interfere with the comfort.
Specifications Datsun Go + (Plus) Panca
New price
Type D: USD 92.85 million
Type A: USD 100 450 000
Type A Option: USD 100 950 000
Type T: USD 108,000,000
* Price in October 2015, can be changed at any time without prior notice.
Price Used
Type D: 60 millions
Type A: 70 million
Option Type A: 70 million
Type T: 85 millions
Excess Datsun Go + (Plus) Panca
Disadvantages Datsun Go + (Plus) Panca
Similarly, a full review of the specification and review advantages and disadvantages Datsun Go + (Plus) Panca. Many people think that the Go + Panca is spacious and more luxurious version of the Go hatchback. But in fact much different. Even if the specifications are compared in detail, Go hatchback better in all sectors, including engine performance and handling. Frills + (plus) is located on the cabin to get a third row. The price offered was slightly cheaper than the hatchback version, except for the highest type.