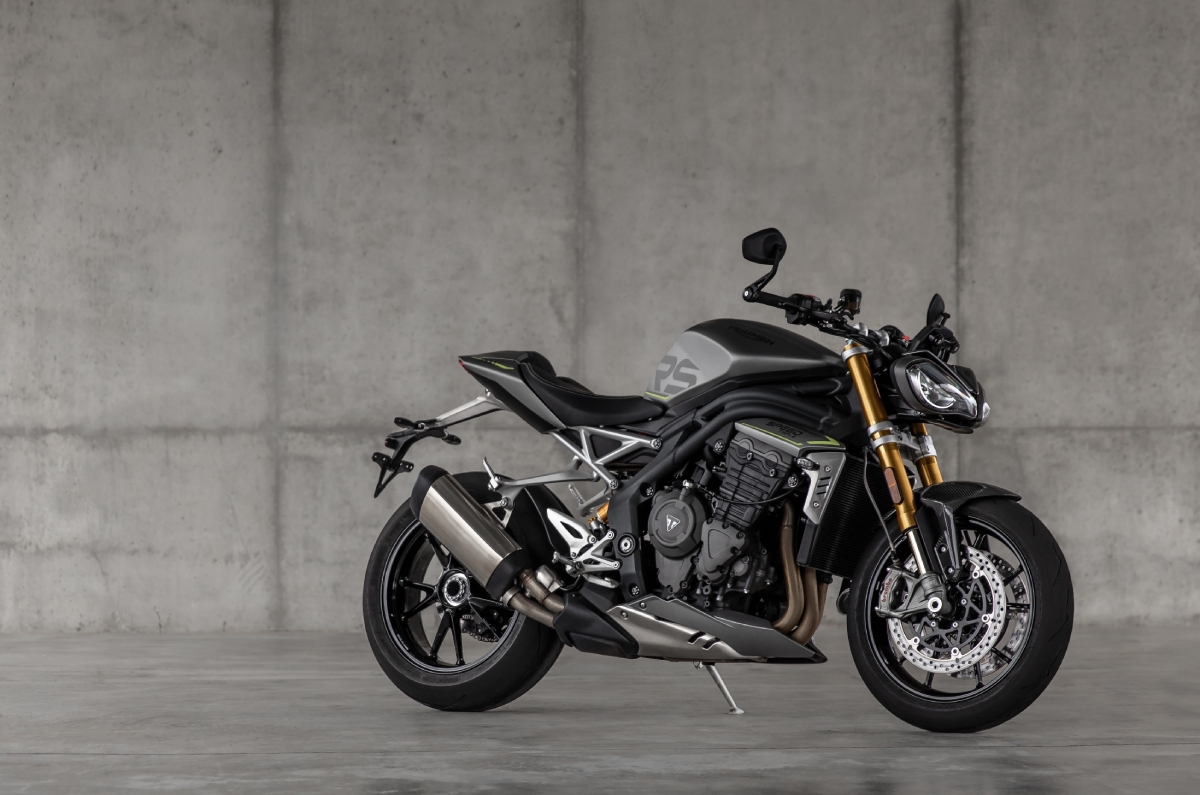 Triumph Motorcycles have introduced the new Speed Triple 1200 RS, that's based on a brand-new chassis and features a new engine and suspension.

Triumph has developed the new Speed Triple RS completely from the ground up and the most obvious difference between the new bike and its predecessor, the Triumph Speed Triple 1050, is the new design.

The new Speed Triple 1200 RS looks slimmer than the previous motorcycle, evident in the compact looking frame and sleek LED headlamp that's inspired by the current Street Triple R/RS. The size and shape of the 15.5-litre fuel tank adds to the streetfighter stance of the motorcycle, while the tail section is minimal in comparison. You'll also notice the new tail lamp that's bigger than the thin, LED strip that adorned the Speed Triple 1050. But  what comes as a big aesthetic departure from the previous Speed Triple 1050 is the omission of the high-mounted twin exhausts. Instead, the new Speed Triple 1200 RS has a conventionally mounted, single exhaust canister that looks less bulky and also contributes to the weight reduction, which we’ll get to later. Thankfully, Triumph has retained the Speed Triple’s single-sided swingarm that gives an unhindered view of the rear wheel as well as the fat, 190 section tyre.

On the whole, the Speed Triple 1200 RS looks sharp and aggressive, while retaining the typical street fighter stance.

The ergonomics have been improved, with a more purposeful stance, says Triumph. The handlebar is wider by 13mm, while the footrest has been moved onwards. The new perch is said to be more comfortable and set at a height of 830mm.

Moving on to the features list, the Triumph Speed Triple 1200 RS gets a new 5-inch TFT display, with a unique user interface. It has been designed to offer greater ease in making on the go adjustments such as tinkering with the traction control settings, says Triumph.

Another big highlight about the new Speed Triple 1200 RS is the full keyless system, including keyless ignition and steering lock, as well as a new keyless fuel filler cap.

Along with a lightweight chassis, the Speed Triple also gets lighter wheels, shod with new Metzeler Racetec RR tyres that are designed for both road and track use. Speed Triple RS gets fully adjustable Ohlins suspension, to tailor the ride and handling as per the surface. At the front, there’s a NIX 30 fork, that’s adjustable for preload, compression and rebound; while at the rear, there’s a TTX36 twin tube with similar adjustability as the front.

When it comes to brakes, Triumph has equipped the motorcycle with Brembo Stylemas that bite onto twin, 320mm discs at the front; while at the rear, there’s a twin-piston Brembo caliper. The other highlight of the braking system has to be the Brembo MCS, span and ratio adjustable lever.

Just as the chassis, the engine is brand-new, with increased displacement, power and torque over the engine in the previous bike. The new 1160cc, inline-triple makes 180hp at 10,750rpm and 125Nm at 9,000rpm (8Nm), which is 30hp and 8Nm more than the predecessor’s motor. Triumph has also managed to reduce the weight of the engine by 7kg and incorporated a new, free-breathing intake as well as exhaust system. The engine is paired to a new stacked 6-speed gearbox and has an up/down quickshifter as standard.

With all that power at hand, the Speed Triple 1200 RS is kitted out with a comprehensive suite of electronics. The 6-axis IMU assisted system consists of 5 ride modes (Rain, Road, Sport, Track and Rider) and lean sensitive traction control and cornering ABS. Besides these safety related electronic bits, the motorcycle also gets cruise control as standard.

The Triumph Speed Triple 1200 RS will go on sale in international markets soon and the motorcycle will be launched in India on January 28, 2021. We expect the price to hover around the Rs 16.5 lakh to Rs 17.5 lakh mark.