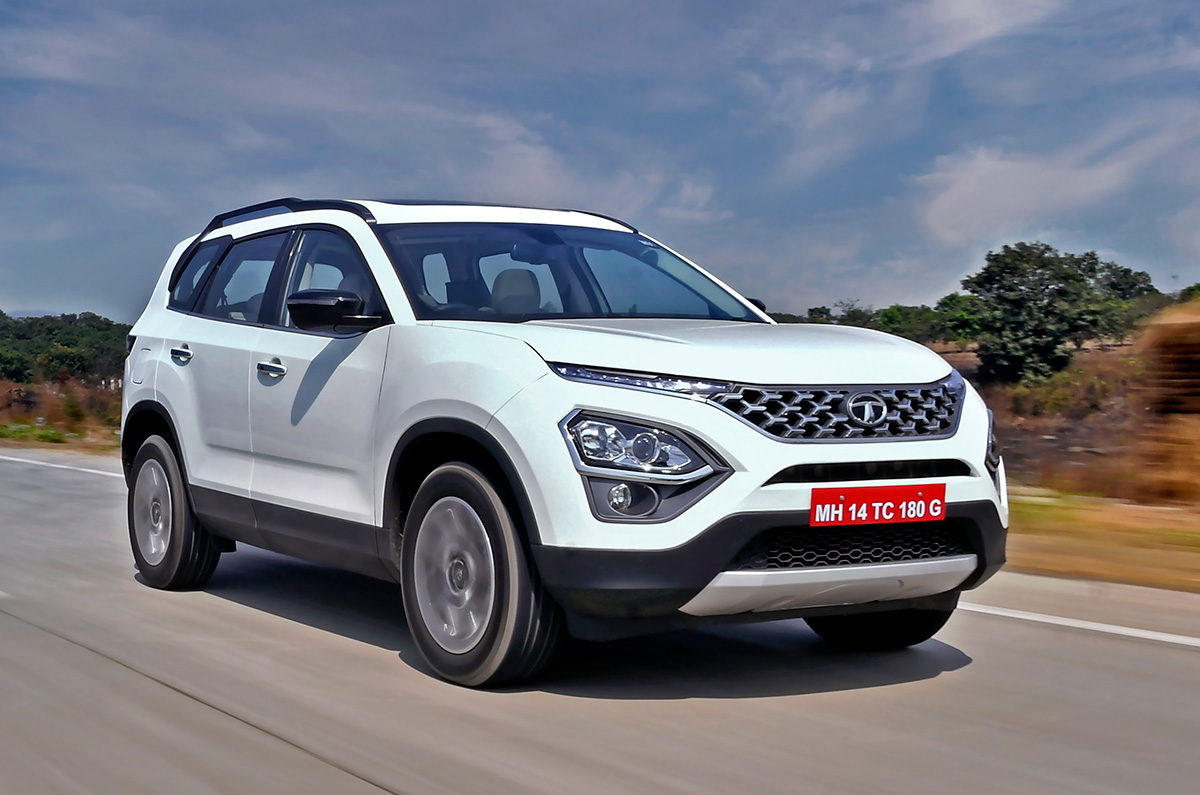 Social media commenters have had strong opinions on the applicability of the legendary Safari name to a front-wheel drive, monocoque SUV but we’ll shut out the noise and see the SUV for what it is.

And what it is immediately identifiable as, at least from up front, is a derivative of the Tata Harrier. The split headlamp arrangement is shared and the only real difference is the new, chrome-finished tri-arrow pattern for the Safari’s grille.

The design up front is almost identical to that of the Harrier, save for the new chrome grille.

From other angles, though, you won’t mistake one for the other. Designed to accommodate a third row of seats, the Safari sports a higher roofline, a longer rear overhang, features a full-size rear quarter glass, and the tail-end is more upright too. Even the tail lights, though similar in treatment, are different.

At the rear, the Safari a full-size rear quarter glass, a stepped roof and a more upright tailgate.

Adding some flavor to the Tata are its chunky roof rails that are styled to suggest a stepped roof, somewhat of a trademark element on the original Safari. In dimensions, the new Safari is 80mm taller and 63mm longer than a Harrier, though width and wheelbase are unchanged. All in all, the new Safari has a great stance that’s only helped by the 18-inch diamond cut alloy wheels. Curiously, while the rims are a size up on the Harrier’s, they’re of the same design.

Inside, things are familiar. If you've been behind the wheel of a Tata Harrier, you'll immediately feel at home in the Tata Safari. The smart-looking dashboard is common to the two models but what brings in the necessary distinction on the top-spec Safari is its Oyster White interior theme. Sure, the cabin looks really upmarket as a result but buyers with a fetish for spotlessness will really struggle to keep the light leatherette seats clean. A welcome inclusion on the top-spec Safari is the easy-to-use electronic parking brake that comes in place of the cumbersome thrust lever-like manual handbrake.

The dashboard design and layout is similar to the harrier, though the interior now gets a Oyster White theme.

Just as on the updated Harrier, you get a dominating view of the road and much of what you touch inside is high quality. Panel fit is also much improved from the first of the Harriers but some ergonomic issues persist. For instance, the centre console fouls with the driver’s left knee. You’d also wish Tata updated the infotainment system. The 8.8-inch touchscreen looks a bit small by today's standards and even things like the rear view camera could have seen a few more pixels added.

On the plus side, the features list is long and is headlined (quite literally so) by a panoramic sunroof, a sweet-sounding JBL sound system and a powered driver’s seat. Tata has also included connected tech that lets you remotely keep an eye on your car, but there’s no wireless charging onboard. 6 airbags and hill-descent control are exclusive to the top-spec XZ+ versions but it’s commendable that ESC is standard fit.

It’s when you move to the middle row that you’ll sense a link between Safaris old and new. Like the original, the new Safari sports theatre-like seating in which the second row seats are positioned higher than the ones up front. This elevated seating gets you excellent visibility not only out of the side windows but the front windscreen as well. As standard, the Safari gets seven seats with a bench-type middle row. Seat comfort is superb and the slightly higher H point (relative to the Harrier) has translated to a spot-on seating position. The Safari also goes one-up on the Harrier with the option to slide the 60:40 seats back, and if you want even more room a ‘Boss mode’ lever lets you adjust the co-driver’s seat from the back.

The second row seats are extremely comfortable and their ability to be slid back adds to the comfort.

Also on offer on top-spec Safaris is a six seat option that brings in captain’s chairs for the middle row. These seats are beautifully cushioned, boast a wide range of adjustment (there’s Boss mode too) and a fold-down armrest is included as well. It’s just that passengers with larger frames will find the seats aren’t the widest around. What’s also missing are sunblinds for the rear windows and locating the USB slots near the centre tunnel is quite the task.

Switching focus to the third row, the news is good. Access to the rear-most section of the cabin is via the narrow passage between the captains’ chairs or, in the case of the seven seater Safaris, from the kerb side middle row seat. This seat’s one touch mechanism for fold and tumble, and the damped operation is impressive but the aperture isn’t all that large so you will have to contort a bit to get to the third row.

While access to the third row isn't the best, the seating position and space on offer is pretty good.

Once in place, you’ll appreciate the space on offer. Average-sized adults will be able to find a happy legroom compromise with the middle row passenger and even the seating position is not as knees-up as in typical third rows. The relatively large windows help the feeling of space though the air-con vents positioned on the sill seem like an afterthought. Tata has done well, however, to pack in blower control and 2 USB charging slots for the last row.

With all seats up, there is only 73 litre of boot space on offer.

Traveling with a full house does, sadly, mean no room for luggage. Lifting the heavy, manually operated tail gate is a task and isn’t worth the effort given the mere 73 litres on offer. You can split and fold the third row seats to free up more luggage room when you need. The middle row seats on 7 seat versions can also be folded flat to create a large cargo bay.

The Tata Safari uses the same 170hp, 2.0-litre, four-cylinder diesel engine as the Harrier, and is offered with the same 6-speed manual and automatic transmissions too. Unsurprisingly, the driving experience is very similar too. There’s good power but in the case of the manual you have to contend with a heavy clutch that’s not progressive enough and gears that need some effort to slot.

Without a doubt, it’s the Safari automatic that is the one to buy. The Fiat-sourced diesel engine branded Kryotec 170 by Tata works best with the Hyundai-sourced 6-speed torque converter automatic transmission. The gearbox is well in-tune with the engine’s characteristics, gearshifts are timely and smooth and it’s also responsive enough to manual shifts via the gear lever. As before, the engine does groan and moan when you load it and sounds a bit gravelly when starting out but things settle down quickly enough. What you’ll like is the wide spread of power and how effortlessly the engine brings the large Safari up to speed. Driving modes, namely Eco, City and Sport, that alter power also help fine-tune the driving experience.

Initial timing runs suggest the Safari's performce is on par with that of the smaller Harrier.

Talking performance, our quick timing runs did reveal the Safari, that’s heavier by 75kg, to be just as brisk as the Harrier. What the Safari feels like with a full load of passengers is something we’ll put to the test soon. On the subject, Tata has beefed up the Safari’s braking system to deal with the higher gross weight. The Harrier’s rear drum brakes have made way for discs and resultantly the Safari does shed speed more effectively. That said, the bite point is too low on the long travel brake pedal and this can be disconcerting in panic braking scenarios.

Tata could have also worked on the Safari’s steering. It’s a touch on the heavier side at low speeds and is also prone to kickback. At higher speeds, there’s an inconsistency too – the slack at the straight ahead position is followed by an overtly sharp response. What you will like is the ease with which the Safari can cover large distances. It feels confident even if it’s not quite as well tied down as, say, a Jeep Compass. Notably, Tata has tweaked the suspension for added load and the slightly softer setup has enhanced low speed bump absorption. The Safari really does make light work of potholes and bad roads, and it’s in settings as this that the Tata’s tough build shines through. Don’t forget, there is some Land Rover DNA in the Safari’s underpinnings.

Now for the elephant in the room. Is the new Safari, Safari enough when there are no roads? With its monocoque construction, and front wheel drive layout, it’s a radical departure from script to the old body-on-frame and 4x4 model. Frankly, any soul-searching missions to ‘reclaim your life’ can’t be too extreme. For its part, the Safari does get ‘Wet’ and ‘Rough’ Terrain Response modes and ground clearance is enough to tackle a mild trail. Tata says it will look at an all-wheel drive option if there’s sufficient demand.

Should you buy one?

Likely to be priced between Rs 15-21 lakh (ex-showroom), the Safari will command a premium of about Rs 1 lakh over the Harrier. The Safari goes up against the MG Hector Plus, and will also see fresh competition from the new Mahindra XUV500 and seven seat Creta over the year.

The new Safari is attractive, plush and well equipped, and with a genuinely useable third row is it makes a compelling case for itself. Sure, it’s not a versatile 4x4 as the original Safari was but see it as the three-row SUV for the family that it is, and you’ll find that Tata’s new flagship scores where it matters.